OPINION | 2020 matrics are already anxious, registering for the rewrite shouldn't add to that. - Youth Capital

This Opinion piece was published on News24 on the 10 February.  On Thursday 18 February 2021, the Chief Director: Communications & Media at the Department of Basic Education (DBE) Elijah Mhlanga announced that the registration dates have been extended in a Twitter post. The new deadline for both the National Senior Certificate (NSC)  and Senior Certificate (SC) is 31 March 2021. While registration for the SC can be both manual (at a district office) and online, registrations for the NSC can only be manual. While the team at Youth Capital is satisfied with the announcement and the clarity of the instructions, we hope that all learners, parents, teachers and district offices are being promptly notified.

After an academic year dotted by COVID-19 induced delays and remote learning, the 2020 Grade 12 learners are feeling anxious about their results. Those who might need to re-write the subjects they have failed, or want to improve their results to access higher education have the right to know how to re-write. Clear and explicit details on how to access the Second Chance Programme– commonly known as the matric re-write, should be where young people are: in schools, district offices, and on social media.

This information must also be dated and distinguish between National Senior Certificate candidates and Senior Certificate Candidates to avoid confusion. However, at the moment it is unclear how to register and learners are given the run-around with conflicting and incomplete information. In South Africa, only half of the learners who start school are able to complete their education and obtain their matric. The Second Chance Programme is an opportunity offered and administrated by the Department of Basic Education (DBE).

Research commissioned by Youth Capital found that at any time, around 250 000 young people are working towards a matric (or equivalent) through a second-chance opportunity. Initial findings of this study shows that ‘second chancers’ are not a small minority, they are estimated to be half the size of the full time Grade 12 class. The report will be released in March 2021.

How can learners register for a National Senior Certificate rewrite?

In attempting to answer this question, our team got stuck in a frustrating game of broken telephone. Some learners saw a post on Facebook calling for online registrations by the 31 March; others were told by district offices to register online by 12 March. It took us, as a team of people with social networks and resources, over five days and direct contact with a DBE official to clarify this issue.

We consulted the DBE website, contacted the national DBE, the Western Cape Education Department, three schools, 31 DBE district offices, the WhatsApp line for second chance learners, the DBE call centre, one NGO and three private matric re-write support schools in our quest for answers. We are afraid that after all this we were still not entirely clear whether the 2020 National Senior Certificate candidates could apply through an online registration portal and/or manually at the DBE’s district offices, and until what date. Multiple stakeholders admitted that they were not clear on the registration processes for these exams either.

Based on available online information, multiple emails and phone calls with officials from DBE, at the time of writing, we believe that the process is as follows:

• Those applying for the National Senior Certificate (NSC), can complete a manual application at a district office until 12 March; the online registration is not possible for the NSC.

• Those applying for the Senior Certificate  (SC) can complete an online registration by 28 February, or a manual registration at a district office until 12 March.

Online registrations seem to be causing some confusion and anxiety as well. Some learners in our network were told by district offices to apply online when they attempted to do the manual process. Online registrations require an email address, which many young people don’t have. Also, they are concerned about the costs of completing their online registrations at an internet café if they don’t have data; or not being able to navigate the online platform.

“Communication between the Basic Education Department and its role players is still defective. Urgent notices do not reach everyone. It leads to confusion and creates a fertile breeding ground for misinformation while it is ammunition in the hands of those who are focused on causing panic. Pamphlets in 11 languages would be more effective than television broadcasts”, commented Prof Michel le Cordeur, Head of the Department of Curriculum studies at Stellenbosch University, earlier this month in an opinion article on the Daily Maverick about the weaknesses of our education system. Our experience of treasure hunting for the matric rewrite registration process confirms exactly this.

Unlike the numerous other systemic challenges South African learners face, this problem has a simple solution: ensure that DBE’s website and communication platforms are updated with consistent information and that the district offices have the correct information to assist learners.

The pandemic has highlighted the weaknesses of our education system, but it has also showed the positive impact of timeous communication that reaches all citizens at the right time. Government departments have the ability to make communication work, it is a matter of prioritising it.

“Giving up and settling without a matric certificate is not an option. Most opportunities require it and there are so many ways to cover up where you have lost. During my matric year, my mom had lost her job and I felt like a burden asking for transport money to go to school. It was inevitable I wouldn’t make it”, shares Adam*, a member of the Youth Capital network who found out that he failed matric in 2018. He registered for a re-write the following year, found a tutor and passed his supplementary exam. “When I got my matric certificate, I wanted to show it to everyone. I could feel my life changing for the best”. Adam* is now studying towards a Diploma in Marketing Management.

In our interactions with young people we often find that they are just one piece of correct information away from a life-changing opportunity and it shouldn’t be this way. The Second Chance Programme is one such opportunity and we should make it as easy as possible for young people to find out how to register for it.

On Thursday 18 February 2021, the DBE Spokesperson Elijah Mhlanga announced that the registration dates have been extended in a Twitter post. The language is clear and it includes dates and processes for both the NSC and the SC. While the team at Youth Capital is satisfied with the announcement and the clarity of the instructions, we hope that all learners, parents, teachers and district offices are being promptly notified. 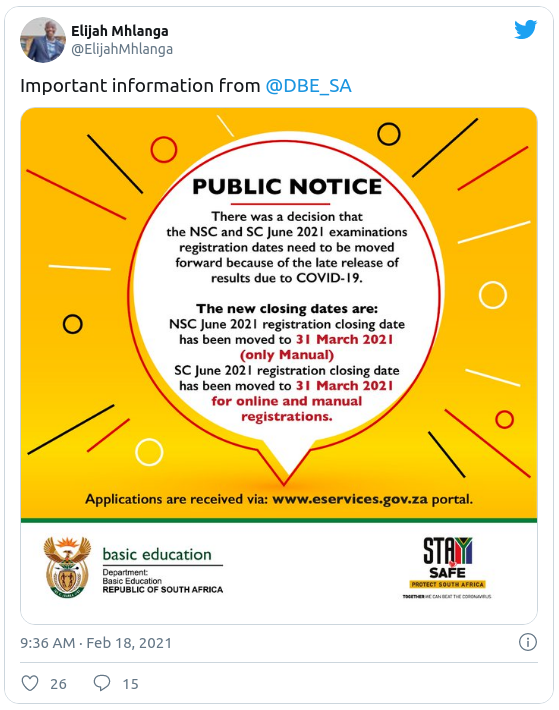 *Not his real name.

The article originally appeared on News24.

Sign up to receive news about fresh research, events, activations and more. No spam, promise.